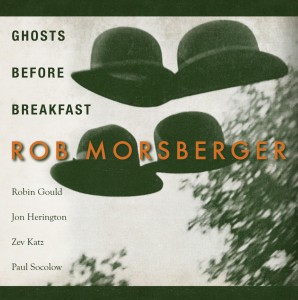 Long known as a literate songwriter with a taste for eclectic source material, Morsberger stretched even his own boundaries on ‘Ghosts’- he comments:  “Themes are…gender, expatriation, art, and especially, again and again, mortality.  There are several historical narratives also…This is probably the most eccentric and ambitious record I’ve made.  It has several long form pieces that move in and out of contrasting styles, and features quite a bit of orchestration.”  Morsberger’s long-time band joins him on ‘Ghosts Before Breakfast’:  Robin Gould on drums, Jon Herington on guitar, with Zev Katz and Paul Socolow sharing the bass chair.  The album will be released as a physical CD on February 14, 2012.

One thought on “Ghosts Before Breakfast”